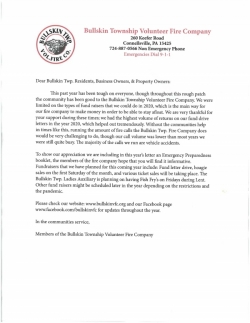 Hello everyone, it has come to our attention that some of our area residents may have received a phone call claiming to be a member of the BTVFC soliciting donations. We DO NOT solicit donations via p...
➜
Mutual Aid EMS 2021 Subscription

Below is the yearly subscription membership for Mutual Aid EMS for 2021. They are now the sole EMS provider for all of Bullskin Township. This membership form will be on our website www.Bullskinvfc.or...
➜
2021 Officers 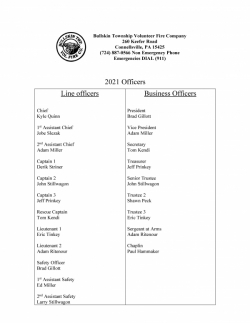 The members of the BTVFC would like to announce the officers for the 2021 year. Congratulations to the new officers.
Colebrook Donation 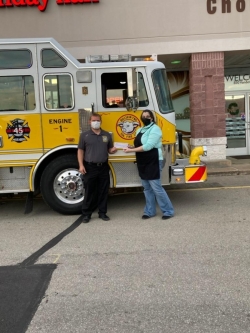 We would like to thank Colebrook Chocolates for their donation.
About us

A group of residents meet in December 1959 at the Pleasant Valley Grange to discuss organizing a fire company. In January 1960 the first recorded meeting was held at Bullskin Elementary School. A charter for the Bullskin Township Volunteer Fire Company and Relief Association was approved in June 1960. The first fundraiser held was a sausage and buckwheat cake supper, which helped to purchase a 1950 Dodge fuel tanker that was converted to a water tanker for fire fighting.

Since that time there have been many fundraisers supported by our residents including hoagie sales, dinners, gun bashes, cash bashes and many more. Through the support of our community we have been able to purchase equipment to help us in our continued effort of keeping the community safe.

This site has been viewed 210,672 times.
Calls
News
Events
Pictures
Apparatus
Maintained by the members and staff of Bullskin Township Volunteer Fire Company. Designated trademarks and brands are the property of their respective owners. Copyright © 2006-2022. YourFirstDue Inc. All Rights Reserved. Content on this web site is supplied by Bullskin Township Volunteer Fire Company. YourFirstDue Inc. cannot be held responsible or liable for any content, text, pictures, or any other media found on this web site.
Management login
Powered by